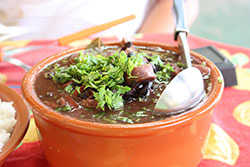 Once again we delve into the fabulously varied world of Brazilian culture and cuisine, this time looking at a dish that is remarkably simple to make and one that should be an easy addition to any summertime menu for caterers who are looking to include a little bit of samba influence over the coming months.

Much like Brazil’s national cocktail the caiprihna, the components of the feijoada can be altered to taste and regional presence making it a wonderfully versatile dish. A black bean stew, very similar to a chili, it is easy to prepare and tastes exquisite when left to cook slowly.

END_OF_DOCUMENT_TOKEN_TO_BE_REPLACED 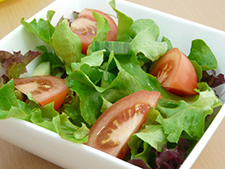 Anglo-American researchers who have been looking into the health benefits associated with traditional Mediterranean staples have recently discovered, they claim, the secret combinations that help keep us all fit and healthy.

According to the researchers the presence of olive oil and leafy salad or vegetables is the key to good health.

The scientific bit of research, which was part-funded by the British Heart Foundation, found that nitro fatty acids would reduce blood pressure by blocking an enzyme called epozide hydrolase. Professor Philip Eaton, from King’s College London, said that “It’s nature’s protective mechanism. If we can tap into this we could make new drugs for treating high blood pressure and preventing heart disease.”

END_OF_DOCUMENT_TOKEN_TO_BE_REPLACED 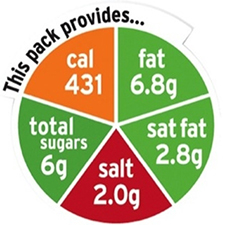 A new piece of research suggests that the practise of listing the calorie content on café and restaurant menus may not be changing the way customers behave.

The appearance of information relating to the calorie content on menus of restaurants and cafes is a relatively new phenomenon and the practise is not widespread across the industry.

The authors of the meta-study looked at over thirty different academic conclusions drawn up in a six and a half year period ending in the summer of 2013 which dealt with how labelling influenced customer choices whilst dining.