US Study finds that men eat more food to show off 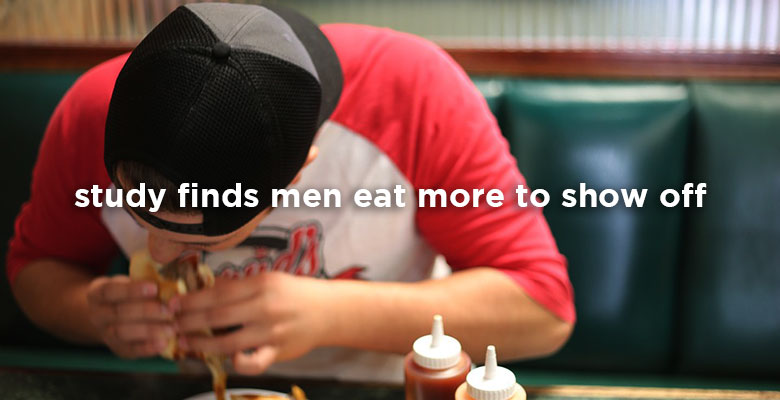 An American study has found that men will overeat to the extreme as they feel it makes them appear more masculine.

Whilst we cannot speak for all males, we think the research carried out by Cornell University, New York, is pretty much spot on based upon our own experiences…

The investigation was taken to see how eating with others affects a person’s behaviour, the University researchers challenged 20 men and women of similar body types to competitively eat chicken wings in a 30-minute contest format.

A group of cheering and non-cheering spectators were added, with a medal given to the winner. Contestants were told that this medal had no monetary value.

Not content with just rating these competitive eaters, a secondary portion of the study involved a survey of 93 students who rated the male and female competitors in order of how intelligent, attractive, healthy, strong and romantic they seemed.

It comes as no surprise that those participants in the study ate up to four times more chicken wings compared to the control group when eating competitively, but even more so when given encouragement and cheered on. Eating even more wings.

Their averages increased from 23 wings to 30.5 for men, in a competitive setting. But this average dipped from 17 without onlookers to 12 for women as a result of crowd interest.

These findings support a number of previous studies that show indications that men eat more or overeat in social scenarios to ‘show off’.

Surveyed after the competition the women participants were said to feel “self-conscious” or “embarrassed”, whereas the male participants felt “cool” and “exhilarated”.

“The typical guy, if you give them any attention when they’re eating, they’d eat up to four times more.”

Well there is some pretty conclusive evidence that the men of our species are all gluttons for glory.

All we know is that we now have a hankering for some chicken wings…whoever eats the least pays!…