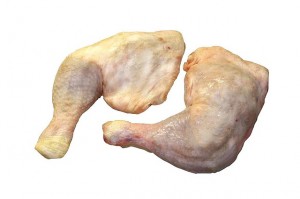 Symptoms can include stomach pains, fevers and diarrhoea, though long-term health issues have been noted such as irritable bowel syndrome and, in extremely rare cases, Guillain-Carre syndrome. At worst, if left untreated, it could kill.

“That’s why we’re calling on people to stop washing raw chicken and also raising awareness of the risks of contracting campylobacter as a result of cross-contamination,” says the FSA’s chief executive Catherine Brown

The majority of issues surrounding the bacteria stem from contaminated poultry, though the bacteria can also be found in raw meat and milk products.

A third of people surveyed cited that they washed poultry in order to remove germs, with another stating that they did so get remove dirt.

The study also found that whilst the majority of people polled were well aware of salmonella and E. coli, not many were aware of campylobacter despite it being the most common cause of food poisoning in the country.

Brown continues; “Campylobacter is a serious issue. Not only can it cause severe illness and death, but it costs the economy hundreds of millions of pounds a year as a result of sickness absence and the burden on the NHS.”

The FSA has also released this promotional video