How to Prepare Crabs

Fresh crab is healthy, delicious and reasonably priced but can be intimidating to prepare.

However once you have demystified the process you will find a number of interesting recipes for which you can use your fresh crab.

1. Live crabs provide the freshest meat but they must be humanely killed before cooking. Place the crab belly up on a board. Using a large chef’s knife, plunge it straight down into the crab’s head, between or just below the eyes.

3. The crab can be served whole with tools for diners to use themselves or the cooked meat can be used in recipes. Place the crab on a board, belly up and twist off the legs and claws. Lift off and dispose of the ‘apron’ (the tail), which is long and pointed in a male and short and broad in a female.

4. Pull the body out of the shell and remove and dispose of the feathery gills and grey stomach sac. Cut the body into pieces and pick out the meat using your fingers, a crab pick or a small knife. Scrape the brown meat from the shell but keep it separate from the white meat. Also remove and separate the roe, if there is any.

5. Crack the claws with the back of a large knife and pull out the meat in a single piece or large chunks.

6. Cut through each side of the leg shells with scissors. Pull away the shell halves to expose and remove the meat.

The Most Important Meal of the Day 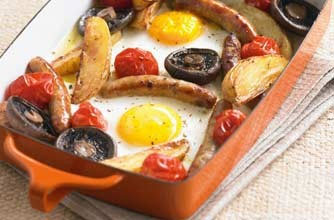 A hearty, healthy breakfast is supposed to prime your body and set you up for the day.

Make a change from the cornflakes or fry up with these delicious options.

END_OF_DOCUMENT_TOKEN_TO_BE_REPLACED

Local food which doesn’t have to travel far leaves a lower carbon footprint than tropical fruits and vegetables which need to be imported from exotic locations.

Growing according to nature’s cycles uses less energy than foods which require artificial light and heat.

END_OF_DOCUMENT_TOKEN_TO_BE_REPLACED

In the past, herbs and spices were often used as medicines or to disguise the flavour of food past its best and to lend some protection through their medicinal qualities.

These days they are more often used to bring out the flavour of food.

Britain was introduced to many herbs through monasteries, where herb gardens were cultivated for medicinal use.

Whether you have a large garden or live in an apartment, it’s easy to grow your own herbs as they flourish on windowsills and scent the air nicely.

To dry, harvest early on a sunny day, after the dew has evaporated but before midday, so that they are dry but before the oils start to evaporate.

Wrap the picked herbs in cones of newspaper and hang upside down in an airy place until completely dry.

Once dry, store in glass jars in a cool, dark place.

These are best stored whole as they begin to lose aroma and flavour once ground.

Store in a cool, dark place and use freshly ground for full flavour.

An electric coffee grinder is ideal.

Clean out the strong flavours by grinding a couple of teaspoons of rock salt between spices and after use.

The humble sausage is not just for breakfast make the most of this versatile ingredient with warming winter recipes.

These are beautifully simple dishes but benefit from using really good quality or even speciality sausages.