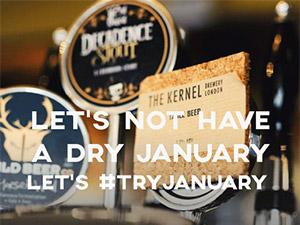 “January, historically, has been a quiet month for pubs and many people use it as a time to reduce their spending as well as their intake,” explains The Publican’s Morning Advertiser editor Rob Willock.

“But this means that people write off visiting their local pubs.”

“We think we can make January a month for discovering new favourite drinks and dishes and we also think the trade has a lot to offer its customers who are willing to challenge their taste buds.”

Through a burst of well-timed marketing and advertising it is hoped that the campaign would prevent thousands of establishments up and down the country from seeing dire takings during the first month of the year.

As well as being a tool to keep revenues at an acceptable level, the organisers also see it as a chance for people to give something back to the community by offering different and limited edition ‘Try January’ options.