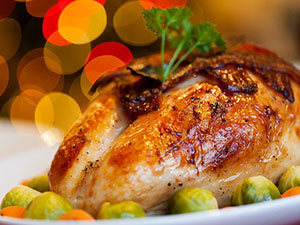 Other popular responses included eye-rolling and groan inducing festive jokes and falling in front of the television, but, somewhat surprisingly, Brussels sprouts came in third. (Not that there’s anything wrong with them by the way, it’s just that they haven’t found favour with this writer…yet.)

The poll also found out the perfect Christmas dinner which would consist of two slices of meat, two pigs in blankets, a heap of stuffing, three roast potatoes, two parsnips and five or more Brussels sprouts.

Interestingly, only a third of the people surveyed wanted a starter with their dinner. For those that do, a classic prawn cocktail topped the list with a soup coming in close behind.

Rather predictably, when it came to desserts it was Christmas pudding that topped the charts.

“[This] research uncovered some great findings about what people think makes the perfect Christmas dinner,” explained Chris Brown of Unilever.

“Pubs that want to offer crowd pleasing Christmas menus should make sure they offer all the classics like turkey, roast potatoes, pigs in blankets and gravy.”

So with Christmas approaching, are you catering to the masses or are you offering something new?