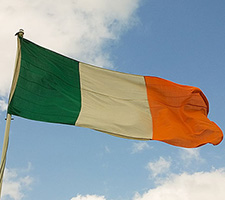 Today, for those who are unaware, is Saint Patrick’s Day. The one day a year where everybody, including myself, becomes Irish, celebrates and dons some emerald coloured clothes.

So, what could be better than combining Ireland and food for today’s entry to the CS Catering blog?

The answer, clearly, is nothing.

References to the tradition of Irish food can be traced back right to the formative years of Irish literature. The hero of Irish mythology, Fionn mac Cumhaill, gained his intelligence and wisdom from eating a salmon.

As the tale goes, the fish had inadvertently inherited the world’s knowledge after consuming a number of fallen hazelnuts and when captured and cooked by Fionn, this knowledge transferred. The salmon would then be known as Finton, the Salmon on Knowledge.

Unfortunately, no other salmon farmed or ate in Ireland has had such an effect on people’s memory though the fish has remained a popular staple of nation cuisine since. The folk song, and the unofficial anthem of Dublin, Molly Malone tells the tale of an attractive fishmonger.

At the heart though of many Irish dishes is the potato. After being introduced to the island during the 16th century, the vegetable soon became the main food crop of the nation and became a very valuable commodity.

However the reliance upon the potato ultimately led to a catastrophic loss of life. In the infamous famine of 1845-49 1 million people passed away and a further million left for life elsewhere.

A traditional potato dish is that of Colcannon which has been immortalised in verse.

Did you ever eat Colcannon, made from lovely pickled cream?
With the greens and scallions mingled like a picture in a dream.

Oh, wasn’t it the happy days when troubles we had not,
And our mothers made Colcannon in the little skillet pot.

And then there is Coddle; a dish that is without a recipe. Assembled from leftovers, commonly bits of bacon and other pork bits, it can contain potatoes, onions, carrots and any amount of seasoning.

At the other end of the scale Ireland is also a place where you can encounter a thriving gastronomic scene. Dublin is home to four of Ireland’s nine Michelin starred restaurants including the only two-starred establishment in the country, Restaurant Patrick Guilbaud.

But for the recipe today, here are the instructions on how to mash up the perfect modern twist on the trusty Colcannon. With the presence of a ‘super food’ and the addition of bacon, what’s not to love?

It is said too that if an unmarried girl found a charm in her bowl of Colcannon then the next available man to enter the house would be their intended future husband.