The catering and hospitality sectors of the United Kingdom enjoyed a very positive January as consumers shook off the prospect of a New Year’s hangover and continued to spend their money on meals out and short trips away from home.

According to reports that we chronicled last month, the two industries saw year-on-year spending rise nearly ten percent whilst sales of food and beverages also rose during the same time period.

END_OF_DOCUMENT_TOKEN_TO_BE_REPLACED

Superfoods come and superfoods go. Some are heralded by food bloggers, others are championed by celebrities and others are seen as the trendiest thing in existence. Most though tend to have a short and fleeting life in the public conscience before they gradually fade away, only to be replaced by something else. And so their cyclic lifestyle continues.

However it turns out that could be some scientific value to super foods.

END_OF_DOCUMENT_TOKEN_TO_BE_REPLACED

MONO Equipment provides a comprehensive range of specialist convection ovens and essentials that have been specifically designed for the constantly evolving and demanding needs of the bakery, fast-food and confectionary industries.

Their specialist catering equipment can be found in many independent artisan bakeries in the United Kingdom, as well as many high profile retail chains, and their most popular items are now available to purchase through CS Catering Equipment.

END_OF_DOCUMENT_TOKEN_TO_BE_REPLACED

Pulled pork has taken the nation by storm. A few short years ago the slow-cooked method of cooking pork wasn’t commonplace in commercial kitchens, but now the dish is thriving and given a prominent place on many menu boards of fine-dining restaurants, fast food outlets and gastro-pubs. Whether you want it as a main, as an accompaniment or part of your sandwich filling, we’ve gone crazy for tender pulled pork.

But despite its rise to prominence in commercial establishments and being a favourite amongst diners, it seems that pork isn’t as popular as you might think…

END_OF_DOCUMENT_TOKEN_TO_BE_REPLACED

Will you be considering different cuts and different meats?

Prices for popular meats such as beef and lamb are rising, despite the fact that inflation has, relatively speaking, kept the overall cost of food low. Unfortunately, it’s a case of supply and demand.

For example, there has been a noticeable drop in in the number of cattle coming to market in Great Britain and this can be correlated with the price of beef gradually climbing upwards.

END_OF_DOCUMENT_TOKEN_TO_BE_REPLACED

Saint Patrick’s Day, the one day in the year where everybody is Irish, whether they have any emerald blood running through their veins or not, takes place next week and it’s an event that has many within the catering, publican and hospitality sectors rubbing their hands with glee.

The associated revelry and celebrations are well-known and for those working in the industry the event is one that represents a perfect opportunity to maximise footfall and increase revenues in a few easy steps.

END_OF_DOCUMENT_TOKEN_TO_BE_REPLACED 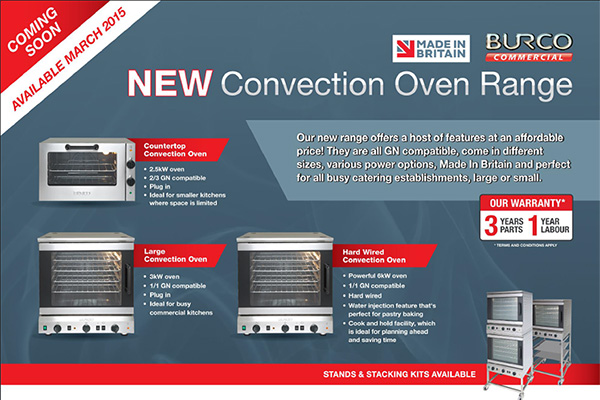 Since the Baby Burco Wash Boiler emerged on the scene in the 1950s, Burco has been at the forefront of the commercial catering equipment sector.

A company with a rich history, Burco originally focused on manufacturing water boilers before recently branching out to build a wide range of British made products that would be suitable for a whole manner of premises be they large or small, indoor or outdoor.

With a reputation built upon affordability and reliability, it is no wonder why Burco has become a leading name in the British catering sector.

Now,  the company is set to unveil their latest line.